Adopt a Plot Bunny - Free For All 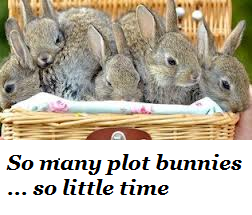 WOW! We have 91 unfilled prompts from the 2nd Annual Spring Fic Exchange! Since there are so many good ones, it's a shame to just let them sit there. This is a free-for-all, meaning anyone can write a story, create art, make a vid... etc based on any of these prompts. Since there are SO many, we're not going to do an official claiming. If you see a prompt you want to fill: GO FOR IT! There is no cut off date, no word limit, etc. We're only asking that you have fun, keep it in the spirit of the comm, and keep us hopping with good stories/art all summer. Do make sure you credit your prompter. If you want to know a little more about the prompter's likes/dislikes, here's a link to the original post, which has their favored pairings, dislikes, likes, etc: http://spn-bigpretzel.livejournal.com/447429.html#comments