The All-Conquering Spell of the Fuzzy Baby Sheep


Dean looked at the building and groaned. “Really, Sammy? A Bed and Breakfast?”

Sam was already unfolding himself from the driver’s seat. “Yes, a Bed and Breakfast, Dean. In case you hadn’t noticed, we’re in the middle of nowhere. We’re both tired, and I am damned if I’m sleeping in the car again. Now are you coming in while I ask about rooms?”

Dean scowled. He hated Bed and Breakfasts, with the frilly comforters and freakish cleanliness and floral wallpaper. Not to mention the overly friendly, bored-retiree hosts, who forced food on you at ridiculous hours of the morning, and asked probing personal questions under the guise of polite hospitality. Given the choice between that and his car, he’d sleep in his car, thank you very much. “It’s pink!” He protested, resolutely staying in his seat.

“Only the trimmings,” said Sam, like that was at all better. “Fine, stay here. I’ll come back when I’ve got us rooms.”

Dean turned up the tape deck, concentrating on the calming strains of Ramble On in preparation for an evening of awkward conversation and smothering niceness, followed by eventual escape to a pink and flowery cell for the night, an absurdly early wake-up call in order to be judged over breakfast.

Ramble on faded out, and Dean ejected the tape, replacing in with his well-worn copy of Metallica’s black album. He tapped along to the first song. He moved to a more comfortable position in his seat. He tapped some more. Played some air drums. Watched the door. What the hell was taking Sam so long?

Finally, the door opened once more and Sam came out. Dean stared at him. That was weird. His brother was practically skipping. There was something wrong with his face, like he was trying to keep his mouth under control. Fighting a smile.

By the time he reached the car, Sam had stopped trying to fight the smile. He beamed down at Dean. “Dean! There’s a field out the back with lambies in it!”

Dean narrowed his eyes at his brother. “Did you just say ‘lambies’?”

“Did they do something to you in there?” Dean switched off the stereo and opened his door.

Sam grabbed his brother’s arm and dragged him upright. “No, they didn’t do something to me. The ‘lambies’ thing was just some kind of rollover effect from the lambs being cute. You know, like when you see puppies and immediately feel the need to shout ‘PUPPIES!’ and talk in a weird voice.”

Dean strode around to get the bags out of the trunk. “Yeah, that doesn’t happen to me.”

Sam huffed out a sarcastic laugh. “I bet you a million bucks you can’t go three minutes in the presence of those lambs without turning into a moron.”

“Really, Sam? A million bucks? Why don’t we make this interesting?”

“Fine. Winner picks where we eat for the next month.

“Fine.” Dean hauled the bags out of the trunk and chucked Sam’s at him, before locking up and following Sam into the Bed and Breakfast.

He’d been right. The rooms (separate, because there were no rooms with twin beds) did have floral wallpaper and frilly bedspreads. The Coopers were indeed an excessively friendly older couple, but thankfully didn’t seem to see much need for replies to their chatter. Mrs Cooper was round and warm and comfortable, and Dean kind of wanted to hug her. Mr Cooper was big and made jokes in a big booming voice, and didn’t seem to notice that Sam was only pretending to laugh. Dean knew he was pretending, because they were the same kind of jokes Dean made, only cleaner, and when Dean made them, Sam just scrunched up his face and threw stuff at him.

Mrs Cooper quickly ran through the procedure for bottle-feeding lambs, and handed each of them a small bottle of warm milk, before leading them outside.

Two small, white lambs were poking their heads through the fence, baa-ing plaintively as they waited for their food. Dean had to admit they were pretty cute, with their tight curls of wool, and too-big ear, and knobbly knees and waggily tails. Not that he would ever show he thought that. He was a hunter. Hunters did not think things were cute.

He climbed the fence, kneeling down and presenting the bottle to the left-hand lamb to suckle. It grabbed the teat eagerly, pulling surprisingly hard at it, tail wagging crazily. He laid his other hand on the lamb’s head, running his fingers through the springy wool. “Who’s a hungry lambie? Are you a hungry lambie?”

He heard Sam laughing faintly in the background, but it didn’t matter, because the lambie had finished its bottle and was nuzzling at him, looking for more, and it was doing something really strange to his insides.

And have some pictures of some lambies (you can imagine that is Dean's hand on the bottle): 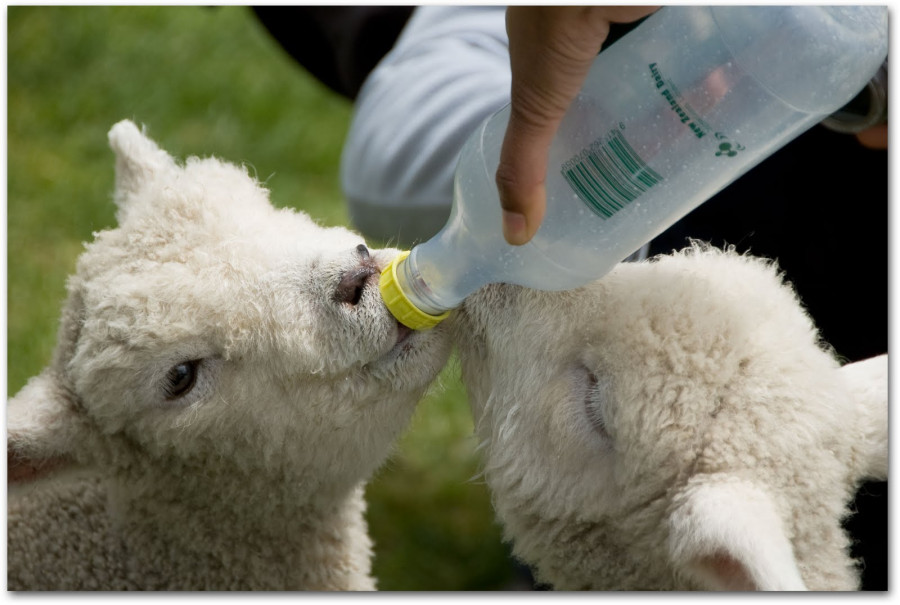 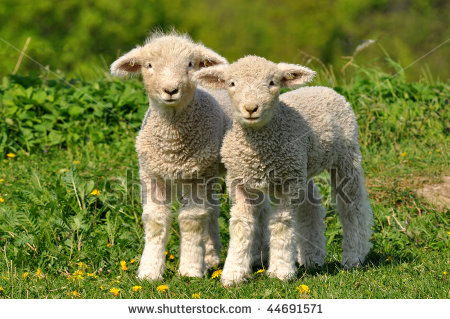 Author's Note: Pure self-indulgence. Not even a proper story. Ok, I have a weird fixation with Dean feeding lambs. This is the second one he does it in (although I'm pretty sure the other one is awful and nobody has read it, so this won't seem too much like me rehashing old stuff).