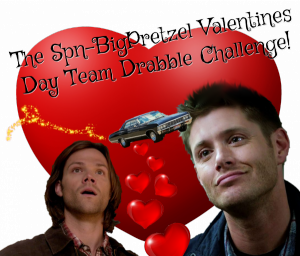 A drabble written for the

Thanks very much to the lovely folks at spn-bigpretzel for this drabble challenge.  I wrote 17 drabbles in all (my goal was 14).  :D

~Jody loves her house~
Even after everything, Jody has never considered selling the house. She remembers the first walk-through so clearly, when she and Sean fell in love with the place. She remembers choking and laughing through streaming tears when the flue didn’t work the first time they tried to use the fireplace. She remembers the precious love they made later, the roar of flames perfectly stoked. She remembers painting Owen’s room robin’s egg blue, love and hope devolving to heartbreak. She’s so glad now, the house is full of life again, girls becoming powerful women in the home she’ll fight to keep.

~wards~
Bobby Singer taught Jody all he knew about warding a home. She never knew such things existed, or rather, she regarded it as pleasant folklore or harmless superstition. Now she would never consider closing the year without tacking holly over every windowsill, or passing a cross-quarter day without smudging. She invited Father Christopher every year to bless the house, painted salt onto every sill, inscribed dozens of holy names round and round the house, Enochian and hoodoo inked onto every lintel, cold iron and silver blades ready to hand in every room. Bobby’s legacy means the world to Jody.

~Jody loves her job~
Jody Mills loves being Sheriff. Fighting monsters is something she does on her own time, but her everyday job entails bringing law and order to Minnehaha County. She checks in on the folks in rehab, the kids in juvenile detention, learns their names and their stories, and works hard to help them stay on the straight and narrow once they get out. Bobby Singer may have been a drunk, but he was so much more. So aren’t they all. Jody knows now just how many horror stories are true, and she’s ready with a listening ear and a warm gun.

~the firing range~
The women head out to the firing range for rest and relaxation, honing their skills side by side. Earmuffs in place, they fire round after round, accurate, deadly. It’s not competition between them, just a rare sisterhood in hitting the target, switching from pistol to rifle to shotgun, hand, eye, and body all working in harmony, talent, hard work and determination making them who they are. Back at the house, Jody and Donna lay out the weapons, supervising as the girls break down, clean, oil, and reassemble. The women are in it together, expert at every weapon in their arsenal.

~the world~
Castiel stood for thousands of years, a Watcher, a task no human could endure. But Castiel was made that way, glorying in all of his Father’s Creation, glorying in his blessed task of watching. Waves, clouds, wind in leaves, every minuscule grain of sand was miraculous to Castiel, showing forth God’s glory into Castiel’s many worshipful eyes. Castiel was reassigned, remade as a warrior of the Lord, but he never forgot how to see the wonder in every aspect of all his Father had made, all the Lord had proclaimed was good in the waters, on earth, beneath the heavens.

~places of worship~
Castiel loves alcoves. In a phone booth, rare as they are these days, one may stand, receiver held to one’s ear, watching the world hurry past. Castiel loves the darkest rear seat in a dive bar, benches in parks and at bus stops, corners where almsgivers drop their spare change into the begging cup. Castiel has been the one in need, many times now; he knows what it is to be seen or unseen, to be loved or uncared for. Castiel loves the opportunity for benison, for succor, for redemption. Castiel loves a quiet chapel, whenever, wherever it may appear.

~playgrounds~
Castiel loves a swing set. There’s a reason Angels build gateways to Heaven on playgrounds (not just that the sandbox makes a convenient staging ground for the transmigration mandala). The rocking cradle meditation of a swing set awakens children’s innocent insight: they remember the power of flight inscribed on the deepest part of the human soul. Children throw all the strength of their whole bodies into that urge to soar, to transcend the limitations of physical laws. Every child knows, deep down: it is possible to swing that hard, to go all the way up. Castiel’s been, and can confirm.

~a room of his own~
That robe hanging on the back of the door, maybe used to be some dead guy’s robe, but it’s Dean’s robe now. Those are his boots by the door, his clothes in the closet, his secret undies in the bureau. His beat-up paperbacks, porno mags, blankets, weapons, memory foam, Those are his empties, waiting for recycling. Everything in this room belongs to Dean, not just the creased and faded snaps of Mom and Dad and Sammy on the wall. That’s his stereo, his LPs (not John’s, not Mary’s). He’s not putting anybody out. It’s been a long time coming.

I do believe these might just be my last five drabbles for this excellent brain tweaking challenge. To the mods, to the peeps who've taken part, to my team mates and my adversaries (;D) FAN-BLOODY-TASTIC work! Happy Valentines my beauts! ♥ Also, LOL! Did you know I've done 42 (I think) of these danged things, LOL! Turns out drabbling is actually quite cathartic ;)

A/N:All fics were cross posted to

Title: Time Out
Rating: K+
Character: Dean
Word Count: 100
Subject: There's one special place where Dean loves to spend a little time out
Disclaimer: I don't own him

It was seventy years old and logic suggested that it shouldn't work. Yet somehow it did.

So Dean just filed it under his 'ain't broke don't fix' list and calmly carried on regardless, relishing the benefits it brought.

Tonight, he appreciated it more than ever as he stood under the powerful spray; its temperature just right, its tortuously good pressure kneading and pummelling aching, tired shoulders like relentless fingertips..

There were many wonders in the bunker; magical and extraordinary things that spanned centuries and astounded everyone.

Right now, Dean would trade them all for a few more blissful moments under that shower. 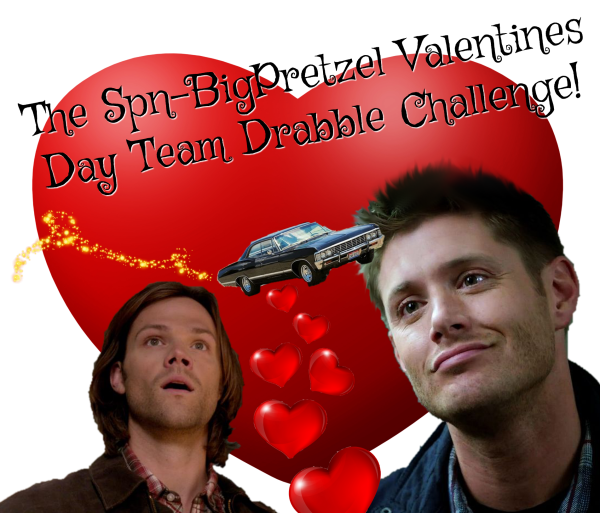 dizzojay
So,  as we're heading toward the end of our Valentines Day Team Drabble Challenge, I'm just stopping by to say ...

You guys have been on fire, and filled the community full of fun and love over the last two weeks!
We haven't had a final count up yet, but we've definitely got a total of well over one hundred drabbles!

I've barely started to work my way through reading them, but I'll definitely be doing that over the next few weeks, and I'd really recommend that everyone does the same, because the drabbles I have managed to read have been all kinds of awesome!  There's also some wonderful art to enjoy too.  Be sure to leave plenty of love and appreciation to our wonderful authors and artists!

So tomorrow, we'll announce the winning team, and then at some point we'll be posting a masterlist ... and that's going to be an epic undertaking!!!!

So, authors and artists, thank you all for taking part; and readers, thank you for supporting our participants.

We hope you've enjoyed this challenge, and we can look forward to the return of the DEW challenge next week!
Collapse