Rating: pg13
Word Count: 100
Characters: Dean and Sam
Summary: some seasonal eye-candy.
Disclaimer: I write for love only. Supernatural characters belong to Kripke and the CW.
Theme: Hallowe'en costumes and dressing up; also inspired by the Fanfiction.net SPN100 prompt "glow"

“Stay sharp, Sam. Any one of these could be the shifter!”

“Why did I have to come as Cat Woman?” Sam grumbled, immediately regretting it as he realized he’d fed Dean his perfect cue to say –

Sam tugged irritably at his armpits and crotch. “All this rubber is making me sweat.” 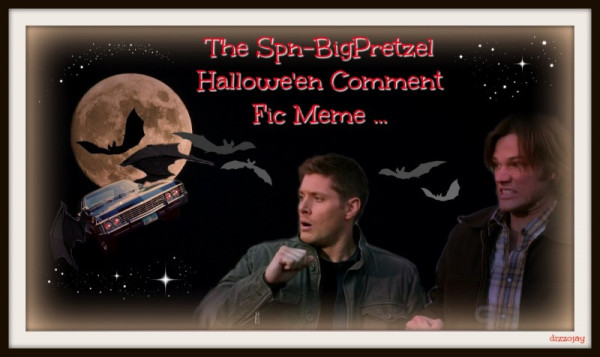 Hallowe'en is almost upon us, and is the day that our comment fic meme (here) was originally due to end.

However, I've had a couple of approaches from people who are working on their fic, so we'll keep the fic meme open until the following Sunday, 5th November.

MORE TO AN ANGEL THAN MEETS THE EYE

Dean’s great idea – for Castiel to dress up as an angel for Hallowe’en – is not, apparently, as simple as it first appears

“Dean, an angel’s natural form is approximately the height of the Chrysler Building, which, along with our wing span, could impede my manoeuvrability.  Our halos glow with the heat of a thousand stellar nucleii, and I would need access to all the Earth’s largest nuclear reactors to recreate that level of fission, and would almost certainly blind or incinerate everyone within the hemisphere.  Our wings also cannot be seen in your world as they are composed of ultra-physical cosmic cellular matter which does not exist in this dimension …”

Dean sighed wearily.  “So white robe, cardboard wings and tinsel halo is out of the question then?”