TITLE: Cooking to Die For
CHARACTERS: Death and Dean
GENRE: Gen
RATING: G
WARNINGS: None, except maybe that this is pretty cracky!
SPOILERS: Umm... Mid season eight for location, I guess?
WORDS: 100

When he walked into the bunker's kitchen, Dean expected it to be empty, so he felt he could be excused for the rather unmanly squeak when he found a surprise visitor, especially since it was Death.

"You can relax, Dean," the horseman instructed as he rolled up his shirtsleeves. "It's not your time. Yet," he added rather ominously under his breath.

"As a being only occasionally of a corporeal nature, I don't have a kitchen. I want to bake cookies, and your kitchen is nice. You may have some, of course."

Dean blinked again. "Knock yourself out!" 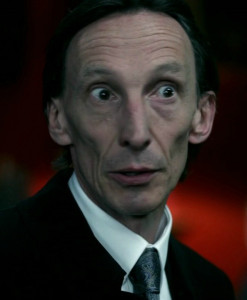 Death is an omnipotent being; nothing is beyond his powers.
Or is it?

How difficult could it be?

If Marcus, that spotty youth in the Pizza Palace could do it, then Death was quite sure he could make a pizza too.  It would be wonderful to avoid those tiresome trips to Earth for snacks.

He read the recipe … roll the dough, add tomato puree, parmesan, mushrooms, pepperoni, anchovies, preheat the oven … Yes, he could do this.

Standing behind the counter in The Chicago Pizza Palace, Marcus stared at a gaunt, black-coated man with soot smeared across his nose and grated cheese in his hair.

“So that’s a Deep Pan Pepperoni Feast with anchovies, Sir?”

Dean almost bowled Sam over as he breezed past in the hall, heading for the garage.

"You're going out?" he asked incredulously. It usually took a major incentive to budge Dean this early.

"Need anything from the store? Death gave me a list."

"I don't think so. Wait, Death?" However, Dean was already gone.

Sam peered into the kitchen warily. Sure enough, there was Death, digging through a cupboard.

"Do you have a sifter?" Death asked without looking.

Death leveled a withering glare at him. Sam helped pull down some implements stored high and gladly retreated again.


Death looked over his choices. Chocolate, different kinds of popcorn, nachos with cheese, a super sized soft drink and other classic movie food. He wasn't sure that it was enough but he could always go out and get more. He wanted to enjoy this time as much as he could.
A comedy movie marathon would be good for his equivalent of a grace, even Death needed some time off once in a while.
He made himself comfortable, grabbed the first bowl of popcorn and started the first movie. The Fates had told him he would love the Final Destination series.

justmep2
Characters: SPN Cast
Genre: Gag Reel
Music: Ameircan Authors - Best Day Of My Life
Summary: Whoa-Oh-Oh-Oh-Oh-Oh-Oh. (What? It's a Gag Reel vid, there is no summary!)
A/N: This isn't the official Gag Reel, just my edit for it.

Dean and Sam sat uneasily and very quietly in the bunker library--it wouldn't do, after all, to upset their ominous visitor.

Finally, Sam couldn't take it anymore. "How long do you think he's going to stay?"

Dean shrugged. "I sure ain't kickin' him out!"

A sweet, heavenly smell wafted into the room, followed in short order by Death carrying a heaping plate of warm cookies. He set it in front of the brothers. "For your trouble."

"Are you leaving, then?" Sam asked as Dean bit into a cookie, moaning contentedly.