"Sam? Dean?" Castiel looked around. He was in a large circular room and there were two humans staring. He stared back, maybe one of them wasn't so human after all, he felt different, wrong.

"How did you get in here?" The maybe-not-human with large ears approached and brandished some sort of device at him. It wasn't a weapon Castiel knew.

"Something's not right here." Castiel waved his hand but the room didn't waver. "No Trickster is this powerful."

The device pointed in his direction made a whirring sound and Castiel took it. Maybe it could help him find the Winchesters.

“Raphael! Come look at this!”

The archangel hurried over at Michael’s call, expecting a matter of some urgency and rolling his eyes when he realized his eldest brother was merely observing the humans--again.

“They’ve created a way to record and broadcast images. Their inventiveness is astounding, don’t you think?”

Michael chuckled. “That’s what you said about indoor plumbing.”

“Raphael, have you seen my spe-”

“Hush!” Raphael snapped, never looking away from his view into the living room of a human. “My program is on.”

Title: Interesting...
Characters: Castiel, Dean
Genre: Gen
Rating: R
Warnings: None
Spoilers: Game Of Thrones S1
Word count: 100
Disclaimer: I don't own Dean, Cas or any of the GoT characters and will not profit from using them in this drabble

Title: My Innermost Self is not a Hugger
Genre: Gen, humour
Rating: G
Summary: People's clothes are spontaneously changing into items they've worn in the past. What sort of curse is this?

For prompt from an old comment fic meme at

spn_bigpretzel    where someone wanted a return of Dean's 'I Wuv Hugs' shirt and Sam's purple dog shirt.

Not a DEW entry, but I hope you guys will like it just the same.

Not having to sleep while the Winchesters do affords Castiel a lot of free time ... 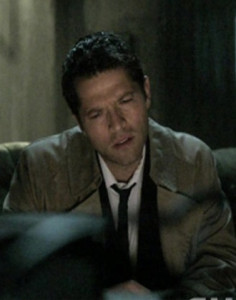 He’d watched ten people sitting in a house, drinking, swearing and fornicating with each other, a bunch of rednecks arguing over who’d fathered their babies and taking effectual swipes at each other with their fat, tattooed fists, and some scantily-clad Australian beauties gyrating in front of the Sydney Opera House.  He’d positively devoured Dr Sexy MD, Sex and the City and Desperate Housewives.

And of course, who could possibly forget the Pizza Man?

It was truly educational.

He would have to do something about the boring TV in Heaven when he eventually went home.