The Angel and the Hacker Parts 1-3
Bunkerfic, 3 drabbles set sometime after "Slumber Party" (9x04) I'd like to continue this but RL may get in the way...
Characters: Castiel and Charlie (1 and 2), Dean (3).
Pairings: No pairing as such but I'm assuming that Charlie would ship destiel, either seriously or humorously.
Rating: G

Startled, Cas pushed away from the piano and sprung to his feet, a defensive readiness in his posture. “What do you want?”

“Whoa, slow down, I’m Charlie Bradbury, a friend of Sam and Dean’s. I’ve got a key.”

“I was not aware of this. How do I know you are telling the truth?”

“Other than that this is a top secret Bermuda triangle-like warded Men-of-Letters bunker? I’m a hacker not a witch, call your boyfriend and ask him,” Charlie smirked.

“Dean is not my boyfriend.”

“Yet you assumed I meant Dean? Interesting.”

“I have heard Dean speak of you, but how can I confirm your identity?”

“I have an ID, but seriously, if you know Sam and Dean you know better than to trust a fake ID.”

“And you’re sure you’re not Dean’s boyfriend? Because dude he gave you a key.”

“You said you also have a key.”

“That’s because I’m adorable and I helped save the world from the leviathan.”

“I have been of assistance to the Winchesters at times also,” Cas assured her.

“Dean this girl appears to believe we are in some sort of intimate relationship.”

“Charlie hit on you?”

“No she seems to think you and I are intimate.”

There was a silence. “She’s just teasing.” Probably. “She’s like our kid sister Cas.”

“Is this behavior normal among siblings?”

“Matter of fact Balthazar and Gabriel have both made similar comments.”

“And you did not mention this?”

“I will attempt to be hospitable.”

“You do that Cas. Just don’t let her touch anything in the storeroom.”

For some reason I thought this week's DEW prompt was clothes, and wrote one, only to discover that it is actually meant to be musical instruments/Charlie. I figured I'd post it anyway :)

Have a terrible poem:

Okay, so although it wasn't Mothers' Day here in the UK (we celebrated back at the end of March), it seemed to be everywhere else on the planet, so in honour of that auspicious occasion, here's a little fluffy drabble ... 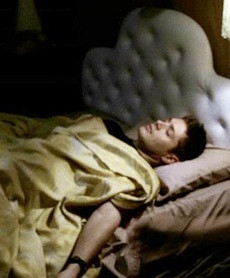