TITLE: The Adventures of Kevin and Doggy Dean
CHARACTERS: Kevin, Dean, and a little Sam
GENRE: Gen
RATING: G
WORDS: 4 x 100
WARNINGS: Nothing, really.
SPOILERS: Spoils for "Dog Dean Afternoon" a bit, but nothing else in detail.


I'm hopeless at writing to a prompt, so I didn't make DEW (again) this weekend, but I did want to give a little something for a happy holiday weekend. So have a little Sam and Dean drabble.

TITLE: Take You Eyes Off Him For a Minute...
CHARACTERS: Kevin, Sam, referenced Dean
GENRE: Gen
RATING: PG
WARNINGS: Indecent public behavior?
SPOILERS: Spoils for "Dog Dean Afternoon" a bit, but nothing else in detail.

Kevin looked over at the officer scowling at him and punched Sam’s cell number into the pay phone. “Please pick up, please pick up...”

“Hey, Sam! So, Dean and I are at the police station in Lebanon-”

Sam sighed over the line. “What’s he charged with?”

“Public intoxication, urinating in public, and assaulting an officer.”

Who knew Dean would decide to pee on a hydrant and then bite the hand of the officer who confronted him about it? At least they bought the story that he was drunk, not insane.

The boys need something very special for a spell; Kevin helps.  Or not ... 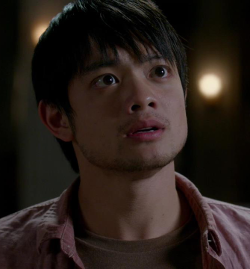 Kevin jerked his head up, a piece of paper sticking to his cheek.  There was a seagull just inches away from his face, staring at him curiously. He backed away slowly, his back protesting an upright posture after so many hours bent over.

"Squawk!" The seagull hopped closer, lowered its head and dropped a tiny fish down onto his papers, a small puddle forming around it.

The thought of losing notes to water damage fully woke him. "Get lost!" Kevin shouted, waving his arms.

The bird took off and Kevin glanced at the fish, oddly impressed by the gift.
Collapse