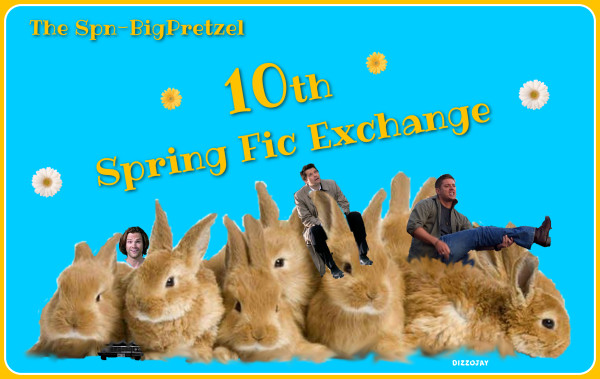 This is a second call for artists at the

spn_bigpretzel Spring Fic Exchange.
Posting begins on the 21st May, so time's marching on and we still have two great story ideas that need artists.
We don't need a Big Bang's worth of art, just a story banner as a minimum, but anything you can cok up for your author will be greatly appreciated.
If you have already claimed a story to art for, now's your chance to claim a second story should you wish!

For ease of reference, here are the two story outlines still looking for artists!

(Working) Title: Let Me Tell You What Happened
Synopsis: A gruff diner owner tells an interviewer all about his experience of his employee Adam.
Snippet:

Overheard in a diner
So, you wanna know about the new guy? Adam? Yeah, he seemed a pretty decent guy. Kept his head down and worked hard, kept himself to himself, y'know? Which was great because we've had some people here in the past who are just always bringing it with the drama. Like they just can't leave it at home, you know the type.

Like I said, the wife's keen to hire him right there on the spot, but I'm wondering if she's just busting to get back on her ass behind the cash desk, instead of filling in and serving tables. I'm less sure, thinking the guy's maybe got a shady history, but then I have this sudden Eureka moment -- the light bulbs over my head even exploded, and everything -- and, before you know it, I'm shaking his hand and giving him the job. It was like I couldn't stop myself, like... like a compulsion

dizzojay
Original Prompt: There's a psychotic rainbow-farting unicorn in the bunker and Sam and Dean need to try to get it under control. Unfortunately there's a very specific quality required in order to get the job done; virginity...
Title: The Sweet Smell of Success
Synopsis: They weren't quite sure how the creature had gotten into the bunker, but there it was, and it was apparently very happy to be there. They were even less sure how they would get it out again. They were missing the one most important thing for unicorn trapping and had no idea where to get what they needed.
Snippet:There was still nothing to account for the horrible stench, so he peered around the corner into the kitchen. That’s when he saw it. It was impossible to miss, really. There was a sizable pile of poop right there on the kitchen floor, and along with the scent that emanated from it, there were tiny rainbows. All in all, he had to admit that he’d never experienced anything quite as nasty, and that included his stay in the pit. As he stared at it, dumbfounded, he could hear hooves clattering on the tiled floor, then, more faintly, a whinny.

Grabbing a linen towel, he wet it and pulled it over his face in an attempt to not smell the stuff, and then reached for his phone. “Dean, we’ve got a problem,” he announced. “Can you bring home wet wipes, air freshener and a virgin. It looks like we’ve got an infestation of unicorns.”
Tags: fic exchange, mod post
Subscribe